How You Answer This Question Could Have A Significant Effect On Your Application!

If you’re thinking about applying to join the police force, you know there’s a question that they’re going to ask you, and that is why? Why do you want to become a police officer? And in this video, we’ll discuss the good, the bad, and the ugly responses to that question.

Good day. I’m Russell and here at Prime Motion Training, we’re passionate about helping people to achieve their dream of becoming police officers. And if you are going through the application process, you know they’re going to ask you why you want to be a police officer. And we’re going to look at a couple of different things that you can think about when you’re structuring your response to that question.

All right, let’s look at some language, some terminology that I want you to think about when you’re answering this question. And the first couple are really important. It’s about giving and being helpful. Think about words like contributing and, importantly, making a difference. Community, talk about your community, but, generally use positive language. Now all of these things are giving. These are the things that you can bring to the table and things that are in it for them. There are some other things that might be in it for you, though. It could be very meaningful for you. It could be rewarding, and it could give you the opportunity to do some really positive things.

So, you want to join our police force, what can you do for us?

And you’ll notice these different sets of words are in slightly different categories here. The first is about them. What can you bring to the table? And it’s okay to talk about what’s in it for you as well. But I’d suggest that when you’re structuring your answer to the question, that you start with what’s in it for them, what you can give, what you can bring to the table, what they’ll get out of it. And it’s also okay, talk about what’s in it for you, but let’s put that second and use things like meaningful and rewarding and the opportunity to do positive things, rather than some of the things that we’ll talk about now in the bad and maybe the ugly section. 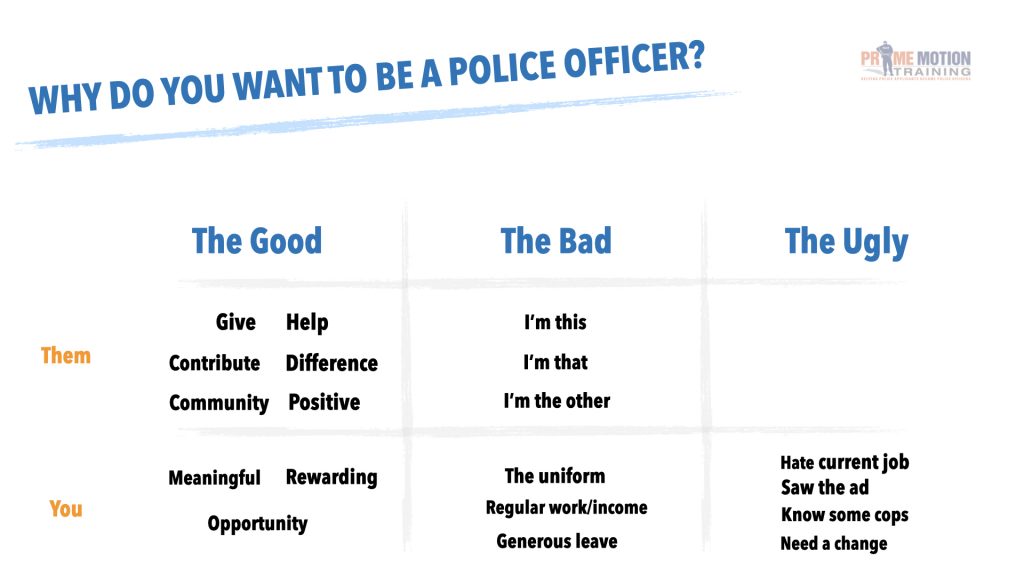 All right, so let’s move on to the bad. I’m this, I’m that, I’m the other, and you’re basically selling yourself as to how wonderful you are thinking that that’s good for them because you’re all those wonderful things. That’s not really the angle or the approach that you want to take. And certainly, what’s in it for you, I get to wear the uniform, I’ve always wanted to be a uniformed guy, regular income, regular work, maybe you’re working part-time or you’re on a casual basis. And what’s in it for you is that regular work and income, and that might be a positive thing. You like the generous leave, might be a positive thing for you and they may have even advertised that as being a positive reason for being a police officer. You get that regular work, you’ve got generous leave and entitlements, et cetera. Sure, but I don’t think that’s a good reason to incorporate it into your motivation. Remember, this is really all about your motivation to be a police officer. And those things are nice, but I wouldn’t be including them in those core reasons why you want to become a police officer.

All right, so a really quick recap, be positive. Think about giving, contributing, bringing something to the table. Ultimately, what’s in it for them to put you in a policing position in their organisation? And it is okay to talk about things that you’ll get out of that as long as they’ve got some depth to the meaning, that they’re really deep and personal, rather than generous leave and change of scenery because you’ve lost interest in your current job.

All right, guys, well, I hope you found that helpful. If you’d like a printout of the words that we use, the items that we discussed, you can download that somewhere near this video. And I look forward to talking to you again in another video. So cheers.

Grab the pdf from this video!