There are basically two conditions the body operates in (in relation to fitness), with oxygen or without oxygen. The analogy I use is to imagine the body has two engines which provide us with power for exercise.

The reason the little engine is able to provide power for these two different types of activities is due to the lack of oxygen required for both. A very high-intensity example is a 100-meter sprinter. Have you ever noticed how a sprinter can blast their way down the track in less than 10 seconds and not be out of breath immediately after the race? Give them another 10 seconds and the breathing rate increases and they become short of breath.

This is due to the lack of oxygen actually needed to perform that level of intensity for that duration. However, because of the high intensity, the body’s onboard ‘computer’ realizes that it will not be able to sustain the intensity without oxygen and responds by starting up the body’s bigger engine to assist. In the case of the 100m sprinter, by the time the second engine fires up, it’s too late anyway as the race is over.

How Is This Relevant To The Beep Test?

There is a critical point during the beep test where the body has to change energy systems to continue the activity. It’s a point at which the body needs to change up a gear.

I have regularly had comments from police applicants who have attempted the beep test who say that they were travelling along nicely for the first couple of levels when all of a sudden their breathing rate went up and they panicked a little thinking they had run out of ‘energy’ already. Of course, panicking will use up more energy and compound that feeling.

There is no need to panic. It’s quite normal and everyone reaches that point during the beep test where the oxygen required to meet the workload exceeds what the little engine can provide so the big engine steps in where the little one left off.

What causes people to panic is that when the big engine kicks in it can cause a noticeable increase in the breathing rate. Through training, you will become better at coping with this physically and importantly mentally as well because you will understand what is happening and why it is happening.

Here’s another analogy to help you understand what’s happening when the little engine (the anaerobic system) is relieved by the big engine (aerobic system).

Imagine if you were stationary in your car, then set the cruise control to 100 kph and hit go! Your car would work quite hard to get the weight moving and get up to the required speed. However, once the speed has been reached the required effort reduces and the engine can settle into a rhythm.

This is an important analogy I want you to keep in mind because it’s a similar process that happens during the beep test. We all reach a point during the test where the little engine is taken over by the big engine. It is at this point that our bodies simulate the cruise control analogy and is able to respond better to the increasing speed because it can deliver more oxygen.

There are a number of factors which contribute to when your body needs to change from using the anaerobic (small engine) to the aerobic (big engine) system. What’s important for us is that we understand that at some point it will happen, we are expecting it and we can manage it.

We often fear what we don’t understand. Having a better understanding of what your body is doing during the beep test and why it’s doing it can have a really positive impact on your state of mind when training and when performing the beep test! 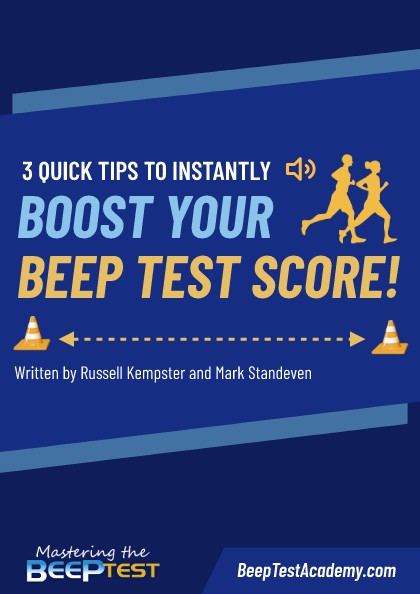